The pictures I love are stripped back. The simpler the better. I don’t like props, themes or elaborate production. All things that Tim Walker is master of. I shouldn’t like his Vanity Fair portrait of Emma Watson and yet I love it. 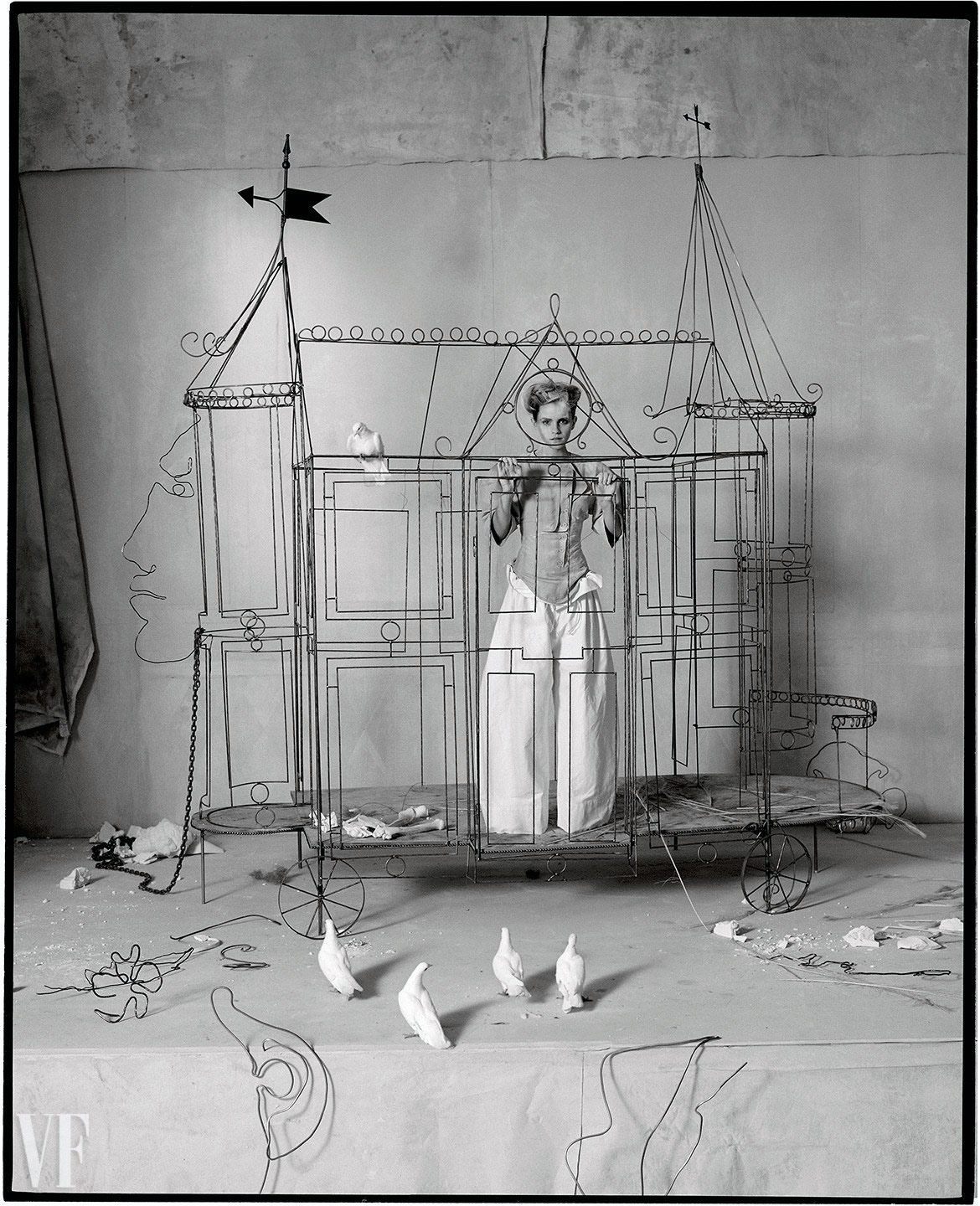 I love that despite, or because of, its intricacy it still feels incredibly intimate. There’s only you and Emma in this image.

The beautifully constructed set is a reference to Beauty and the Beast (which Watson had just starred in). It looks like a line drawing, perhaps a nod to the original animated film? The picture deigns to imperfection, but there’s more precision and planning in this image than any I’ve written about. The circular opening of the clock face perfectly framing Watson’s face is no coincidence. Walker knew what this picture would look like long before it was made.

Credit for the picture’s intimacy is due both to photographer and model. Intimacy is often achieved literally, by using extreme closeups, the opposite of what Walker has done. Watson fills only a small fraction of the image, but the framing of her face makes Watson the focus, almost the target. Walker’s precision in set construction plays a visual trick. It’s elaborate, but carefully arranged so that nothing comes between viewer and subject. A single line cutting across Watson’s face would have destroyed this. We know the image is busy, but that none of it comes between us and Watson tricks us into thinking we’re more connected to her than we really are. We’re in a room full of noisy conversations, but all we can hear is Emma whispering in our ear.

The deliberate set construction would have been wasted if Watson hadn’t delivered. I love her pose. It would have been tempting to be over dramatic, playing Belle locked in the castle, but she’s held everything back. Her expression and pose are difficult to read. Is she frightened, defiant, lonely, questioning, hopeful or defeated? It’s different each time I look, making me return again and again. Watson is posing with her whole body. It’s under just enough tension (copyright Tyra Banks) to perfectly mirror her facial expression — however you read it. There’s something about the placement of her hands on the castle that I love — it’s a little bit “children at the school gates”, but defiant. Walker set everything up, but it’s Watson who pulls you in.

Like Keira Knightly, Carey Mulligan or Charlize Theron, Watson is as talented a model as she is an actress. It’s never just about her boyish good looks, Watson makes a picture believable. There’s a whole set of portraits of her that I love, Tesh’s pictures before she became a star, Boo George’s freckle filled Teen Vogue cover, Steven Meisel’s very Italian Vogue, Italian Vogue shoot and even the badass snapshot of her boxing.

Walker is not one of my favourite photographers. He’s famous for his romantic, whimsical pictures, something hard to define but easy to recognise. For Walker this can mean the English countryside, a pastel colour palette, odd juxtapositions of objects and characters that are almost, but not quite, real. I don’t like this kind of whimsy. They’re supposed to be dreamlike, but I find them nightmarish (in the same way I find Alice in Wonderland or Charlie and the Chocolate Factory unsettling). In this image Walker uses different elements to provide whimsy, the scale, wireframe castle and use of black and white all remove it far enough from reality that I don’t find it disturbing.

Watson is one of the world’s most photographed women. I love this Vanity Fair picture because it was so unexpected and different to her other shoots, but particularly, for the level of intimacy it creates. This is a beautiful picture of Emma Watson. It’s one of the most beautiful pictures I’ve ever seen.

This shoot was mildly controversial at the time for the cover picture it produced. Watson has a feminist voice and people felt the picture did not sit well with that. I don’t agree, but it was my least favourite image from the set.

There’s a well used formula for a cover image (niche fashion and photographic magazines don’t necessarily adhere). It will be a closeup or three quarters crop, always colour, of a recognisable person. You can’t have too much going on in the picture as the designers need plenty of space to add text in. The castle image would never have been selected as a cover, a shame given its superiority to the portrait that was.

Vanity Fair published some behind the scenes footage of the shoot, which makes it look like Watson and the dancers were acting out scenes, rather than posing statically. This might have helped Emma get in to character and make the image believable. The video looks much more like the Walker whimsy that I find disturbing, it’s interesting that this doesn’t really come across in the static images of the same scenes.

For Walker, doing things for real is everything. There’s no CGI scenery or manipulation, real locations and physical sets are used. It’s been said that he’d sooner spend his budget on props than on travelling first class.

This picture was shot on film. By choosing to leave the borders in, we see that Walker got the composition and framing perfect in camera. It was likely shot on a 6x7 medium format camera, probably Walker’s favourite Pentax 67. 6x7 format produces big negatives, allowing for a deep level of detail and proportions that looks similar to large format. Many of the master fashion photographers stick with 6x7 format, using either Mamiya’s RZ67, or like Walker, a Pentax.