I get butterflies looking at Peter Lindbergh’s picture of Cara Delevingne for Douglas Cosmetics. It was always going to be a beautiful portrait of a beautiful women, but Cara’s hard to read emotion and the simplicity of the lighting against her pared back makeup make it timeless. 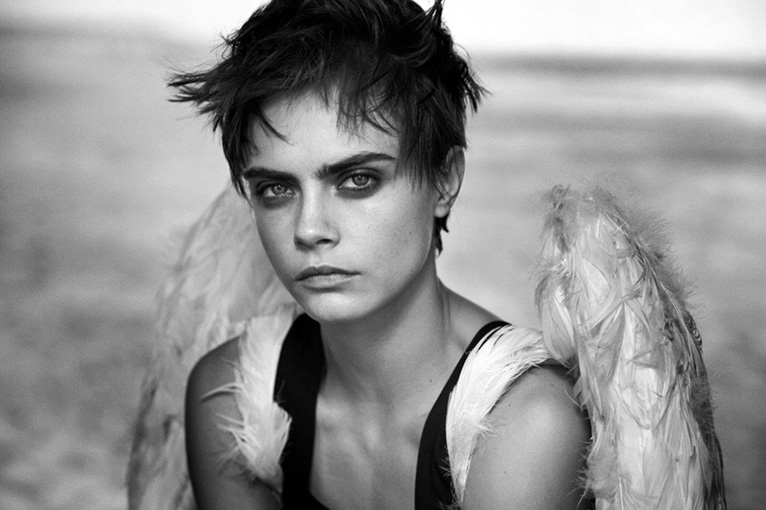 I love this picture because of Cara’s face - there’s so much going on with it, revealing more emotions as you look at it. Initially, Cara is fierce, but then you notice a raised eyebrow and twinkle in her eyes. Look longer and she seems vulnerable, on the edge of tears, or maybe just bored, but then she might smile, or perhaps burst in to tears. It’s relentless.

Cara Delevingne may be solely responsible for changing brows. Five years ago if you saw a picture of her it was all boyish good looks and huge eyebrows. Everyone has Cara brows now - you don’t even notice them, but the originals are still the best.

Cara’s versatility means she can (and has) done it all, runway, high concept editorials and commercial billboards. Her best pictures are the ones that bring out her personality and playfulness. There’s no other model who does this so consistently. Whether it’s in TAG Heuer’s “Don’t Crack Under Pressure” campaign or the selfie shot for Vogue, with Cara, it feels authentic. You get the sense that she really doesn’t care how she looks, she’s just having fun. I don’t think the Tag Heuer or Vogue pictures were planned, but rather in the moment gems. If she was bothered about looking pretty, they would never have come. There are stacks of memorable editorial shoots, but it says a lot for Cara that her commercial pictures are just as good. 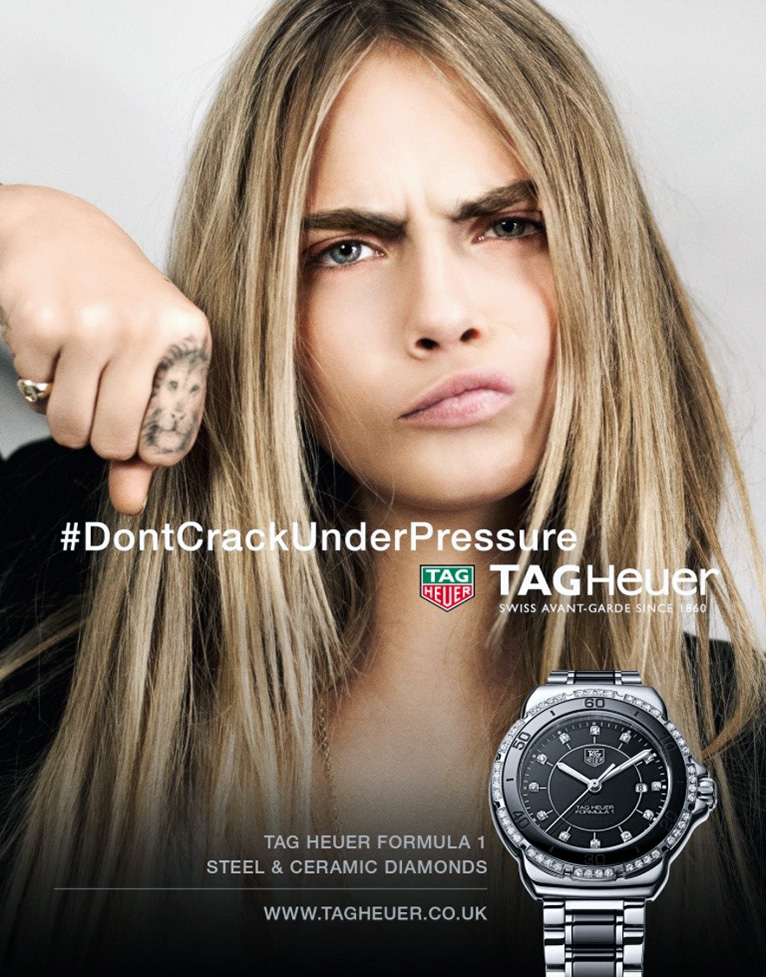 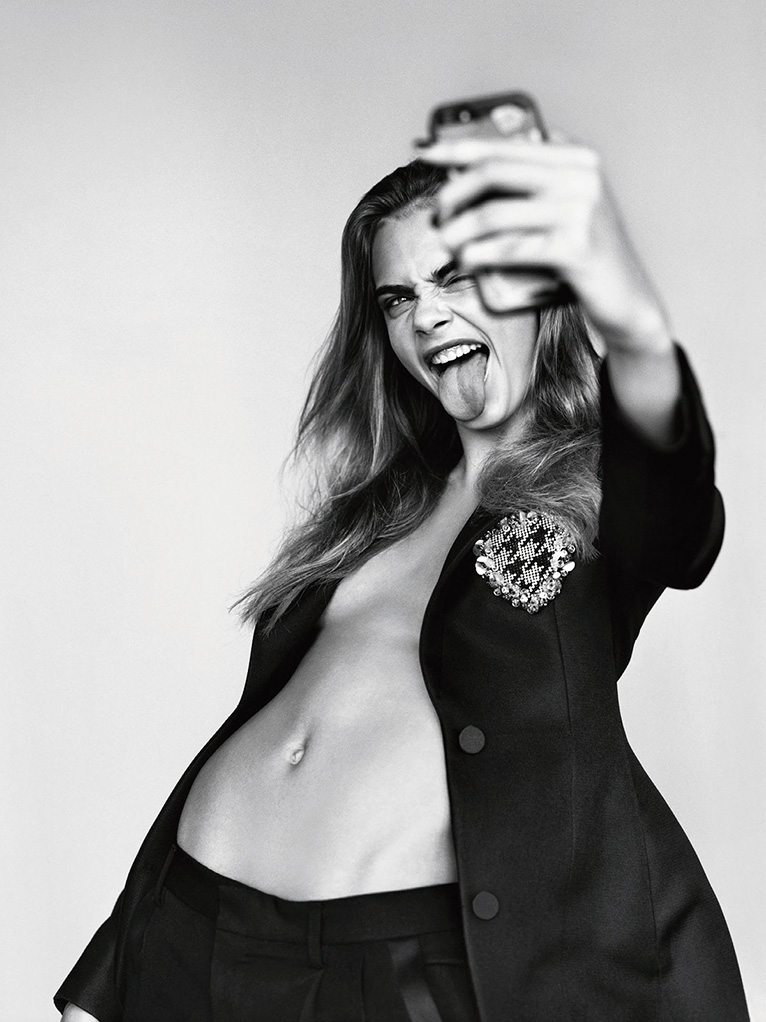 Peter Lindbergh’s pictures, known for telling stories through single cinematic frames, are amongst fashion’s most identifiable. He took one of Vogue’s best known covers - credited with the launch of supermodels at the beginning of the 1990s*. With consistent style, Lindbergh’s pictures follow a pattern, black and white, stripped back and naturally lit. They’re real, without props or gimmicks, he doesn’t stray into anything experimental or “arty”. This picture is slightly unusual, Cara’s wings are something you might expect to find in a Paolo Roversi image. Maybe it was a commercial decision by Douglas Cosmetics. Maybe Lindbergh thought they provided depth (they add a layer between foreground and background). Or Maybe Cara just thought they looked cool and there was no arguing with her. The picture would be just as good without them, but they don’t detract from it. 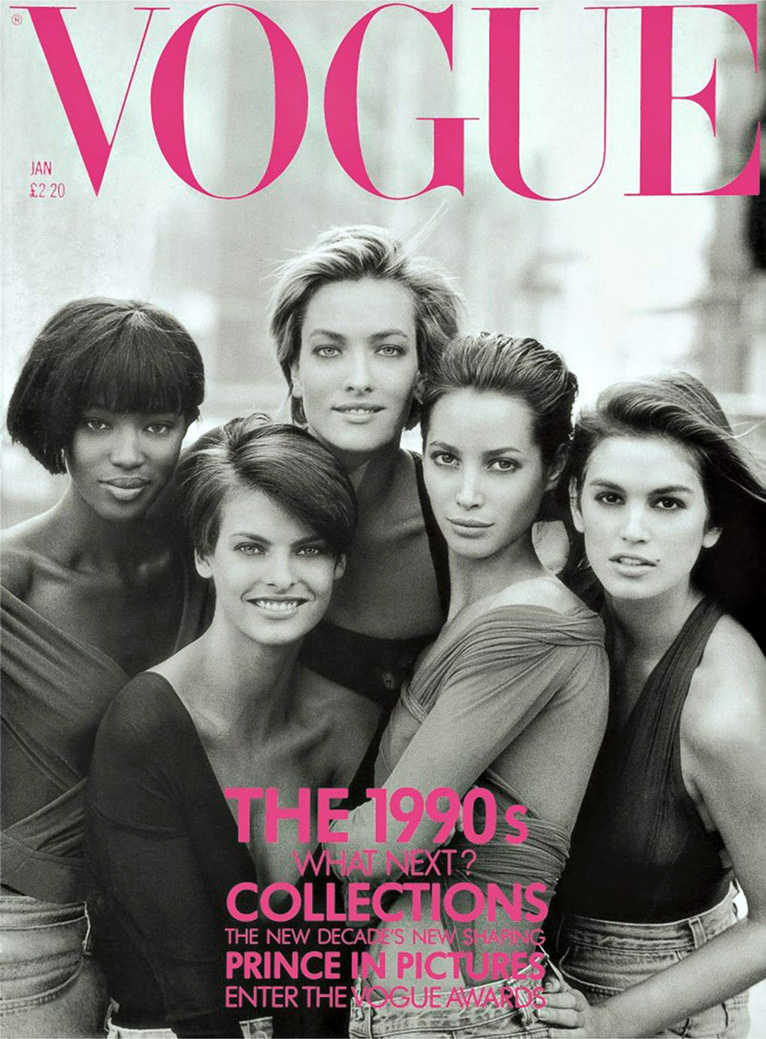 Lindbergh’s picture of Cara Delevingne can trace its routes back to his 1994 bare faced portrait of Kate Moss. The lighting, style and even pose in this quarter of a century old picture is almost identical. Minimal makeup may be on trend in 2018, but this is something Peter Lindbergh has always done. It’s part of why his pictures don’t age. Makeup styles change and can date a picture.

You know what you’re going to get with a Peter Lindbergh shoot. Despite everything changing around him he’s still shooting like he did 30 years ago and is still the best at it. 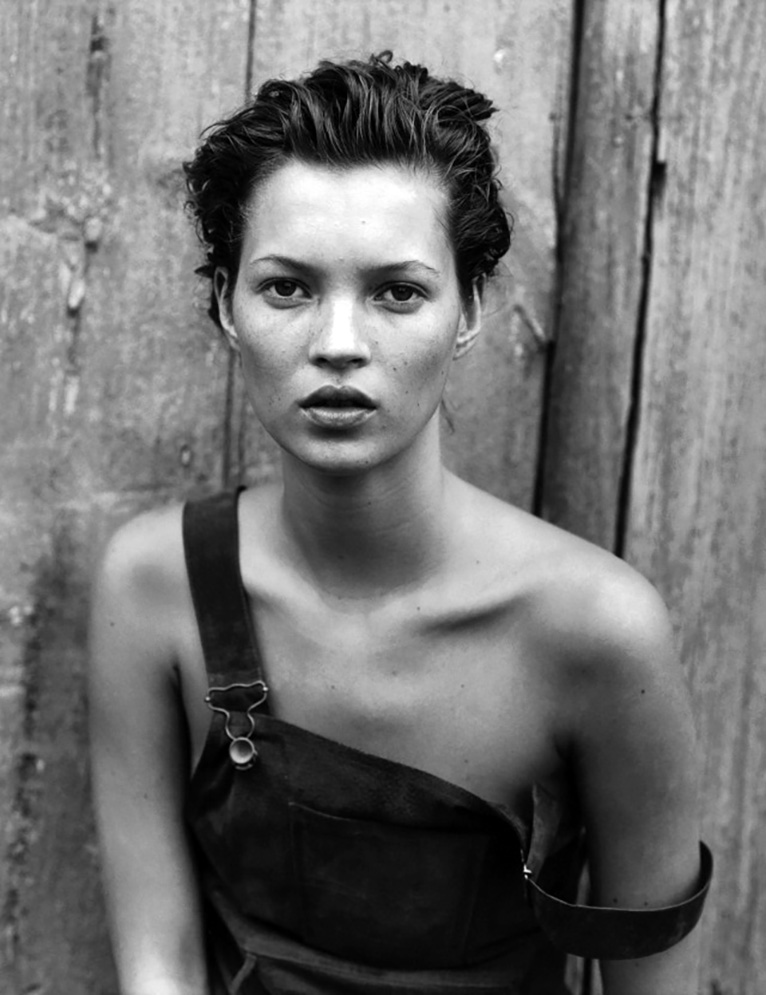 Lindbergh shoots digitally, but by keeping the lighting simple and minimising the amount of retouching he maintains the black and white film look.

His pictures are shot in open shade, or a studio simulation of it. This is a forgiving lighting setup that makes everyone look good, never mind a super model. His pictures tend to minimise gender, they’re never particularly glamorous or sexy. His male and female subjects are often styled similarly. There’s no gimmicks in his pictures, but that gives him nowhere to hide. His pictures are about his relationship with the model and the story he can tell.

Lindbergh’s shoots are lightly retouched, you get creases, eye bags, spots, freckles. They’re real and though this is very of the moment, his pictures have always been this way. Cara does have makeup in this picture (it is for a cosmetics brand) but it’s done with a light touch. In a lot of his pictures the models have no, or hardly any makeup. It can make a familiar face look different and exciting again.