Alessandra Ambrosio has done everything from the Next catalogue, through Victoria’s Secret shows, to high fashion — always glamorous and always perfectly styled. She’s probably one of the most recognisable non-celebrity models there is. Most people reading this will have a picture of her in their house somewhere. In this image, Boo George was able to do something different, making the most of her being very pregnant (she gave birth the following day) to show something new. 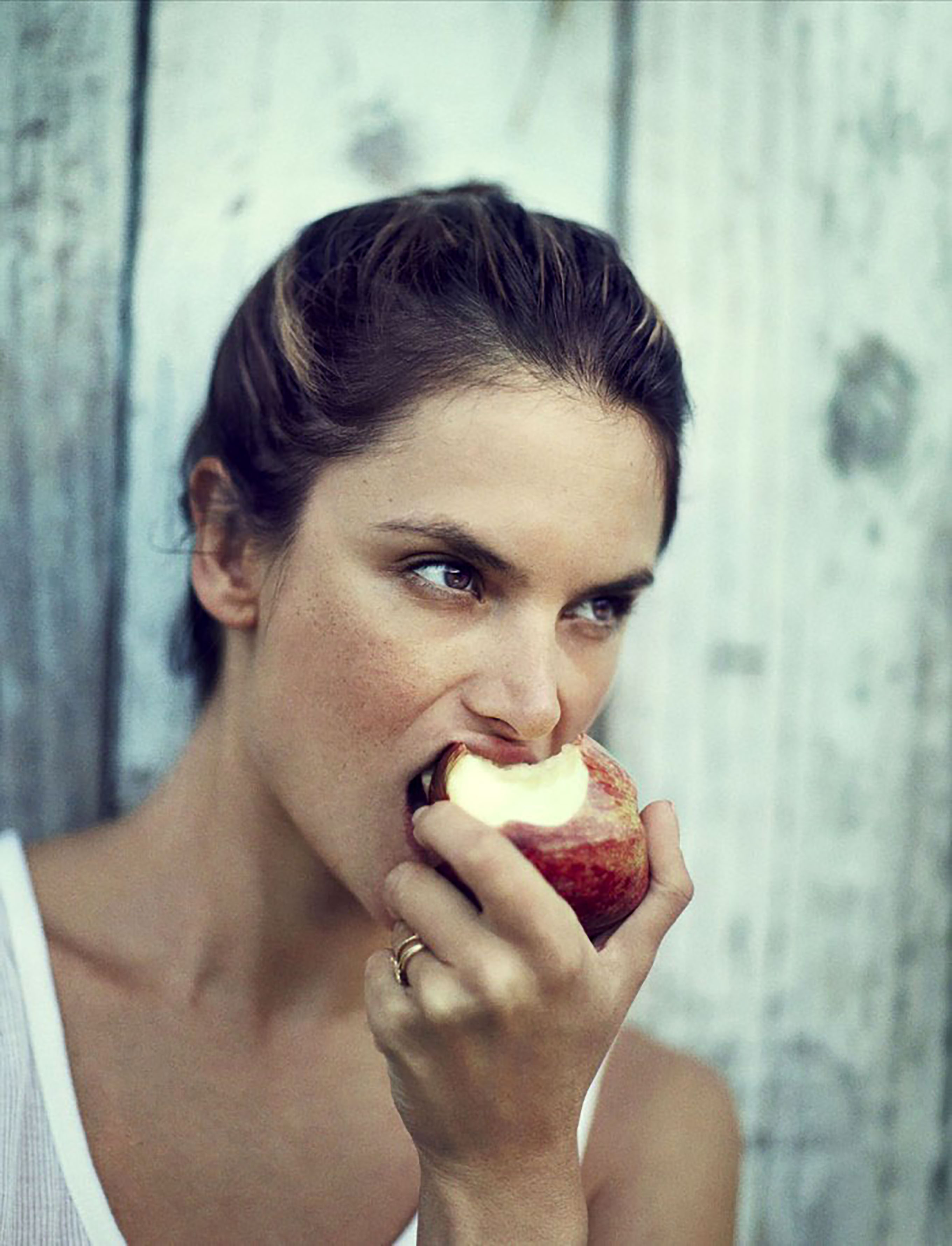 The majority of the photos I love are black and white. I tend to prefer pictures being as stripped back and simple as possible — taking away the colour is a way of removing even more. But when it is a colour picture, I love what Boo George does. He shoots very soft, dreamy images with muted, desaturated colours from a restricted palette.

These pictures seem so slow and calm, about as far as you could get from the Heidi Klum series I wrote about last time. It’s like Alessandra is taking a quiet walk along the beach, enjoying the last hour of sunshine but with plenty on her mind. The pictures aren’t about her being pregnant — they stand on their own without any explanation. I loved the whole shoot but the apple picture and the one with her eyes closed stand out for me.

It’s great to have someone you see all the time suddenly look different. This is the least styled I’ve ever seen Alessandra Ambrosio. Like the Heidi Klum pictures they work because they’re real and authentic, albeit in a completely different way. She has had hair and makeup done, but its very subtle, they’ve kept her red cheeks and freckles. Freckles! I have a huge soft spot for freckles (and dimples) and I’d never seen an Alessandra picture with freckles before.

Both pictures are all about the eyes. In the apple picture she’s giving it the full blue steel stare, but the direction of her glance is balanced by the size and direction of the apple. She’s using maximum model skills to hold the apple in an attractive way (they’ve also carefully taken a very deliberate bite out of it). Hands often look awkward and distracting but not in this picture, 20 years of modelling — she knows what she’s doing.

The colours have been desaturated, but the picture also uses very few tones. Those that are used play off against each other. The red in her cheeks match the apple; the whites of the wood, her top. Then you have the same browns in her eyes, eyebrows and hair. Even the flash of blonde hair matches Alessandra’s skin tone. All the colours are so closely in tune that the picture feels very compact and complete — making it look a simpler and more stripped back picture than it really is. I think this is why I like Boo George’s colour images — he’s able to tie the colours together in the same way grey tones naturally blend in a black and white photograph. What I love in this picture is that it shows Alessandra Ambrosio in a new way. It feels like you’ve finally seen who she really is. The attention to detail that’s gone in to the picture has made it look natural and effortless. 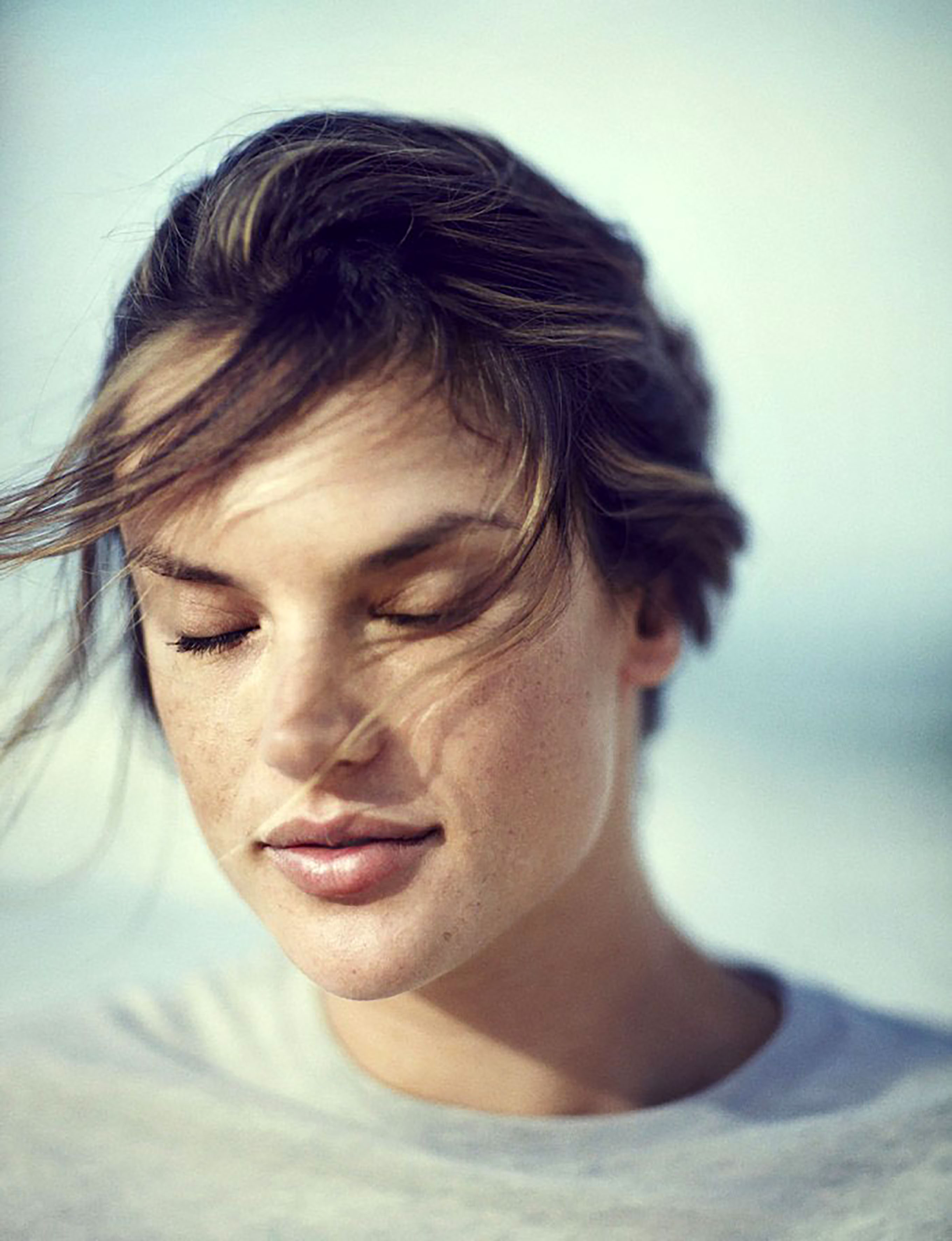 The eyes closed picture shows what you can do in a fashion magazine with a set of pictures making up a story. It would be difficult to use this image in isolation. I think it was probably a lucky moment rather than a planned shot (if it had been planned I think he would have focussed on her other eye). Boo George’s skill in this picture is in recognising what he’s got. It would have been easy to discard it immediately. I wonder if he knew right away that it was a keeper or if it was once he got it back on his computer? Like the apple photo, all the tones match, switching in a grey t-shirt to blend with the grey-blue background.

I love this picture because it’s captured an authentic moment. Alessandra might just have been blinking but she looks deep in thought. The soft, early evening light, freckles, red cheeks and glowing skin show the person behind the model. Focussing on her more distant eye, the unbalanced framing (all the weight is in the bottom left corner) and the wind-blown hair all make it look genuine. That it seems like a mistake is the proof that it is real. Of the hundreds of Alessandra Ambrosio pictures I’ve seen, these two are the most beautiful.

I think these were shot digitally, probably with a 35mm SLR. Both pictures have a shallow depth of field so would have been taken with a wide aperture and fast shutter. It looks like a relatively long lens or her hands in the apple picture would have been distractingly big, so maybe something like a Canon 85mm f1.2?

It looks like the shoot was in the early evening light, shortly before sunset. The sun is quite low — the shadows and Alessandra’s hair in the second picture are level. The apple picture is shot in the shade. It’s very soft but there’s also a lot of light reflected in her eyes, so she’s probably only just in the shade.

They found a very photogenic apple.