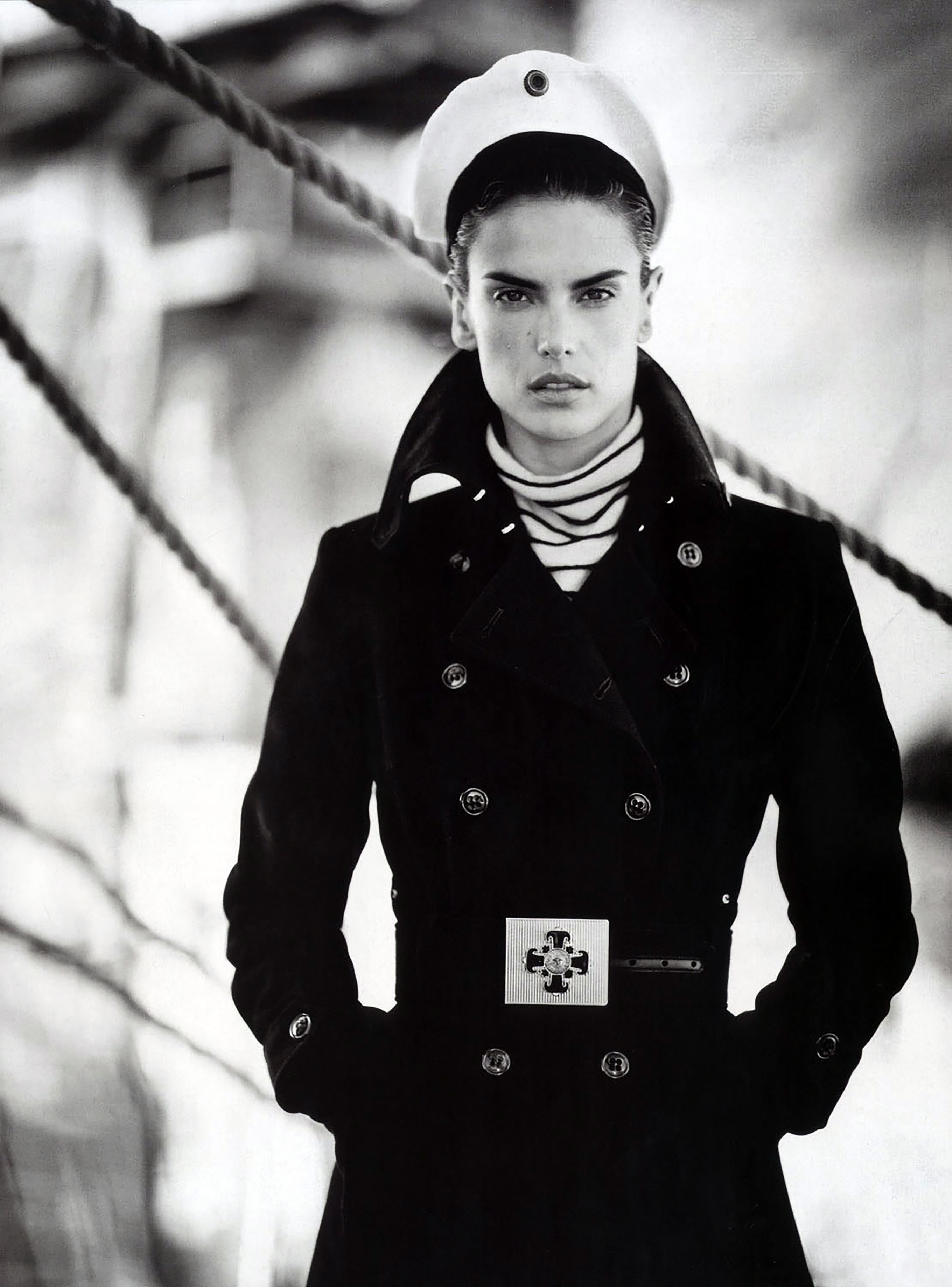 I think this might be the most beautiful fashion picture that’s ever been taken. I found it difficult to stop looking at it long enough to explain why I love it.

Androgyny is one of fashion photography’s most frequently used patterns. It doesn’t always work. It’s used so regularly that it can easily become cliche or tacky. When it’s genuinely ambiguous like in this Boo George and Alessandra Ambrosio shoot, you’re not quite sure what you’re looking at. It draws you in to the picture and leaves you with more questions than answers.

There’s a second layer of ambiguity in this image — what is she thinking? People talk about seeing a story in someone’s eyes, but take a moment with this picture and you’ll see different things. Alessandra has strong angular features and she has an aggressive stance. This is such a fierce pose. It is confident, but there’s vulnerability too. Are her hands in her pocket defensively? Or is she popping her elbows out assertively? Is her face strong and steely or is it pensive and longing. This picture is like an optical illusion, flitting back and forth the more you look at it. The layers of ambiguity entice you to study the image more closely, asking yet more questions of it. It’s why you can’t take your eyes off it. It’s brilliant.

Great stylists and photographers know how to work with different models. They often contrast the model’s personality and natural appearance with something opposite. Alessandra Ambrosio is a Brazilian super model, often pictured on the beach or at carnival. She was a Victoria’s Secret model for years. She has worn a lot of bikinis and this is how a lot of people would picture her. This Boo George image is the most covered up you’re ever going to see Alessandra and it’s the sexiest picture of her. As a viewer it’s rewarding to recognise someone when they look completely different.

The more pictures of Alessandra Ambrosio I see, the more I come to appreciate how much she works in them. She knows she needs to look good, but also sell the clothes she’s wearing. In this image Alessandra’s hands are in her pockets, but she’s pushing her elbows out, in part because it looks more dominant, but also because it shows off her coat. This lets Boo George underexpose the jacket, loosing much of the texture but leaving the silhouette. This simplifies the picture, yet still shows the coat prominently. Her hat has been angled upwards (probably by the stylists), giving a clear line to her face. It’s not how that hat would normally be worn and probably looked quite odd when they were shooting, but it’s given her eyebrows space to breathe, allowing for a much stronger expression.

The background just hints at a nautical theme. The ropes, in combination with her outfit, tell you we’re in a shipyard, but this picture could have been taken anywhere. The location has been used judiciously. If given access to an unusual location, with a lot going on, it can be tempting to try and make use of it all (this is a mistake I make). It can seem a waste to focus on a tiny part, but this is what Boo George has done and the image is all the better for it. The picture is about Alessandra and the cloathes, the background only need hint at the context.

Everything in this picture is right, the background, the tones, the clothes and the styling (that pea coat, collar up looks awesome), but it’s Alessandra’s stare that gives me butterflies.

I love this picture.

I think this was shot digitally, there’s grain in the picture but it was added in post. There’s a narrow depth of field, but Alessandra and the background are compressed, so it would have been a relatively long focal length, it might have been an 85mm lens at f2.

The picture is backlit. There’s a nice highlight at the back of her face, but there’s a lot of light coming from the front too. It was likely shot on a cloudy day. Non photographers often equate sunshine with good light, but that’s not the case. It’s much easier to shoot in overcast conditions, you get nice even soft light. The sort of light people try and recreate in the studio with giant Octoboxes.

The post processing has been done gently, they’ve not gone overboard with skin smoothing, it would have looked weird if it was too perfect. Boo George (or his team) always use a light touch with skin. They have been doing this consistently, long before it became fashionable.