Of all the magazines, Vogue Italia is where fashion photographers want to be. Its images, often provocative, make statements beyond fashion. Steven Meisel has been responsible for many of their most controversial shoots. His 2007 Make Love Not War shoot was described by the Guardian as “the most nauseatingly tasteless fashion pictures ever”. Controversial and difficult, but ten years on they still stand out. 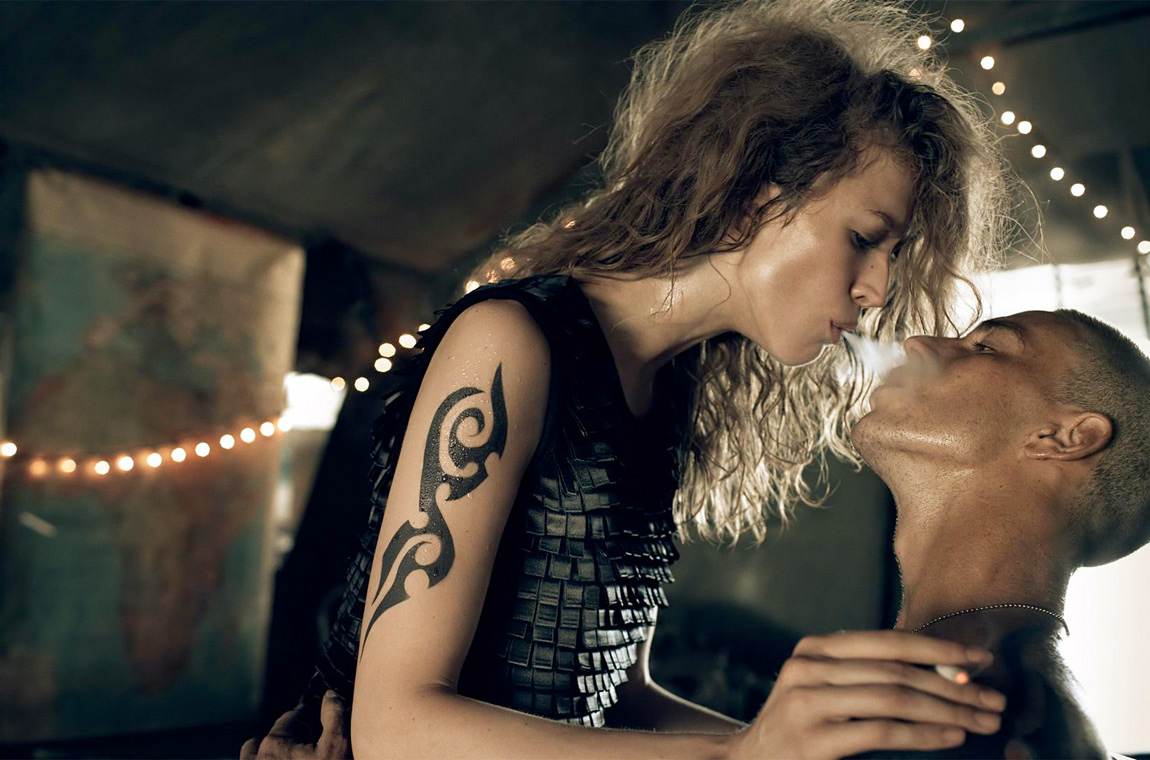 Although my favourite picture was not, in its own right, particularly controversial, the full spread was. It wasn’t only the Guardian who found it offensive both to women and the military. I understand that view and I wouldn’t argue with anyone who held it. Much of this shoot is in how you read the story.

Most Tasteless Fashion Pictures Ever?

These images came out during (and were a comment on) the second Iraq war. The opinion that they were offensive read them as glamourising an ill disciplined male military, abusing women while on duty. For me, they make a political point about the West’s vices (sex, drugs, alcohol, pornography, tattoos and gambling) acted out through the military. I’ve no doubt that Meisel and Vogue knew that they would be controversial and cause the reaction they did, they were playing with the ambiguity in them, but I don’t think these images are in bad taste.

Pictures like these should not be on billboards or train stations. They were in Vogue Italia, whose readers, I think, are more likely to interpret the images as making a provocative political point. They might read them as a statement on abuse of women or of ill discipline in the military, but I doubt they will see them as glamourising abuse.

Context is where the controversy lies. It shouldn’t matter where the pictures are published or who is looking at them. It shouldn’t matter what their existing views are. I’m not comfortable that it does, it feels arbitrary, pretentious and snobbish (like writing about fashion photography). Why should I assume the Vogue Italia readers have a different world view than and average Nuts reader? I do though.

When I look at the pictures I don’t see the power being with the soldiers, it feels balanced. The women look as fierce as the men and the men as beautiful as the women. This comes across in my favourite image from the sequence more than any other.

The last few pictures I’ve written about have been real and authentic. In contrast, this picture is cinematic. The connection between the two models is awesome. It’s charged, aggressive, sweaty and dirty. It’s believable. Usually the connection between people comes when they’re looking in to each other’s eyes, in this picture they’re looking at each other’s mouths. The smoke she’s blowing reinforces this. The two models’ jaw bones line up to make a partial octagon and the silhouette of their faces mirror each other. The detailed composition connects them. His awkward pose makes the picture, he’s totally focussed on her, but he’s got such a swagger. She’s just as tough as he is, but look at her slender fingers and the way she’s elegantly holding the cigarette. Both models brought their A-game to this picture.

I love her hair, they probably spent ages making it look that messed up. They’re both beautifully made up to look like they’re not wearing makeup, but I don’t think the tattoo is great - it looks fake. Her dress on the other hand, is awesome. It looks like it could be some high tech military top, it’s aggressive, almost insect or alien like - fitting the picture perfectly. Steven Meisel shoots clothes brilliantly. He always finds clever ways to work them in subtly. In some of the images from this shoot the clothes are used more like props than clothes - a Meisel trademark.

The lighting is fantastic, it feels dark and dusty, but the light picks up the texture on her dress and his stubble. The highlights on their faces show the sweat and the light from behind makes it feel like it’s naturally lit, it’s not, there’s a lot of artificial light going on. Even the fairy lights add something to the background and repeat the direction your eyes travel looking between their faces.

For all the controversy and technical details, what I love about this picture is the connection between the two models.

This is a high production shoot. It would have had a huge team working on it, probably a custom built set too. There would have been someone project managing. There were probably project status calls and Gantt charts. It likely took months of preparation and days to shoot. Everything about it is complicated, the story, the lighting, the composition, the hair and the makeup. As brilliant as Meisel is, this is a shoot that relies on a team.

The pictures are ten years old yet they don’t look dated. They look like they could have been shot yesterday. These are pictures historians will be looking at in 200 years to try and understand what was going on in 2007. They will stand the test of time.